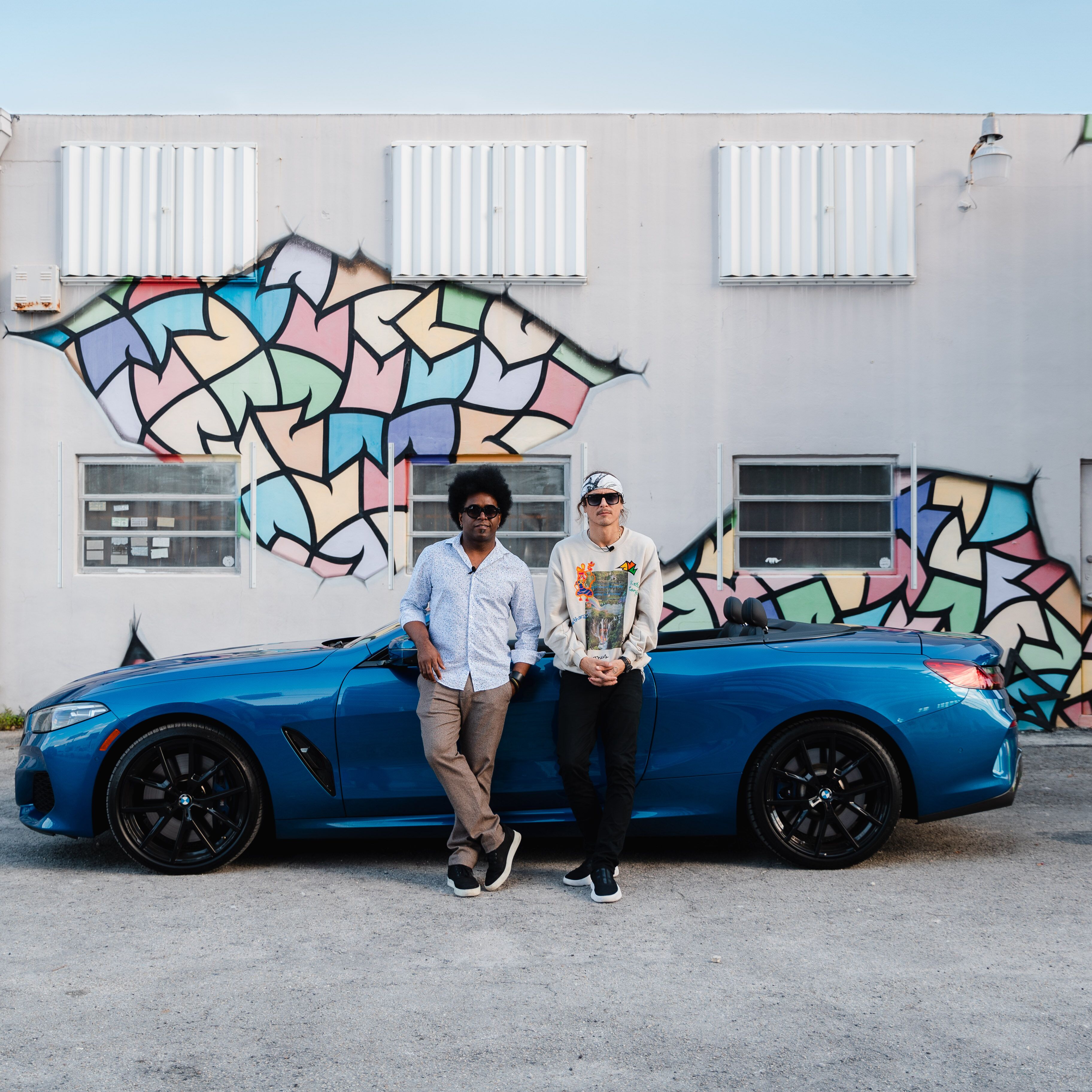 Munich: Miami Beach They are almost everywhere and yet not always easy to find. Large-format graffiti, also known as murals in their most artistic form, are an integral part of the street scene in Miami. The city in the south of the Sunshine State is regarded as the centre of StreetArt. On the occasion of Art Basel Miami Beach (5-8 December 2019), BMW is accompanying artists Alexandre Arrechea and Spencer “MAR” Guilburt on a discovery tour to the most remarkable examples of modern mural painting in the metropolis on the Atlantic. The visual artist Arrechea and the street art specialist Guilburt will complete their Mural Tour in a vehicle that is also suitable for adding a visual touch to the streets of any urban conurbation. The elegant BMW M850i xDrive Convertible (fuel consumption combined: 10.2-10.0 l/100 km; CO2 emissions combined: 231-228 g/km) is a prime example of advanced automotive engineering and offers a perfect unobstructed view of the bright blue sky, the spectacular architecture of Miami and the many facades of the city embellished by street artists.

As a long-standing global partner of the renowned Art Basel art fair, BMW is once again involved in Miami, for example with a VIP shuttle service and as part of the joint initiative BMWArt Journey and the BMW 8 Series Mural Tour. Alexandre Arrechea and Spencer “MAR” Guilburt cruise the city in the BMW M850i xDrive Convertible in search of the most fascinating murals. In their conversations they exchange artistic similarities and mutual inspiration for their work. In addition to the facades on which Guilburt has immortalized himself with his murals, one of the stops on their tour will be an excursion to an exhibition of Arrecha’s works shown at Art Basel Miami Beach by the Nara Roesler gallery.

On the Mural Tour through Miami, the BMW M850i xDrive Convertible also shows off its impressive qualities. With its dynamic and elegant appearance, the open four-seater offers the most exclusive way to enjoy driving pleasure in a BMW 8 Series luxury sports car. 15 seconds are all it takes to open or close the classic textile soft top electrically. The luxurious ambience in the interior, the impressive sportiness of the drive and the advanced operating and networking technology form a unique combination, the charm of which is also immediately apparent to the two artists on their journey through the streets of Miami.

However, the performance characteristics of the open four-seater and its racing-inspired V8engine with BMW TwinPower Turbo Technology and 390 kW/530 hp, are only hinted at, for example by the sonorous sound of the standard sports exhaust system and a few short intermediate spurts. The extroverted Sonic Speed Blue metallic paintwork highlights the generous surface design and precise lines of the open-air sports car without any restrictions. Thus the BMW M850i xDrive Convertible turns into an attraction when relaxedly cruising from the Wynwood Art District via South Beach to the Midtown Design District, which, like Miami’smurals, attracts attention on almost every street corner.