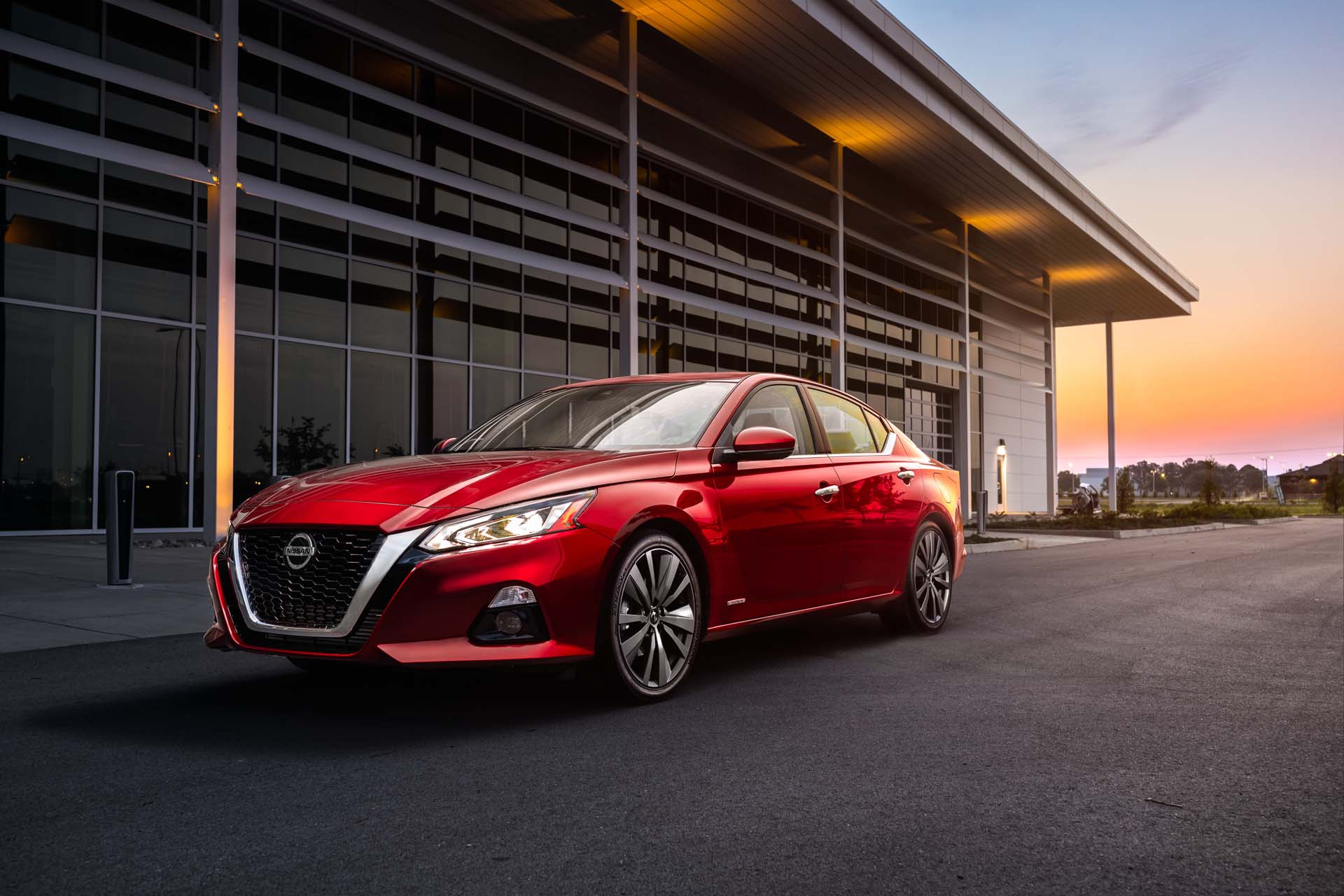 This is the Nissan Altima, the mid-size saloon that’s all things to all people. And it really is all people – you can’t take a car journey in the UAE without seeing dozens of the things along the way. Small wonder, given it’s Nissan’s answer to the Toyota Camry, the UAE’s other favourite Japanese saloon. The Altima was facelifted in 2017, with a new exterior and interior design, and a new CVT gearbox mated to the same choice of engines. Naturally, we’ve tested the new trim, the 2.0 SL Turbo, which comes fully loaded with all the toys. It starts at AED 127,500.

Okay, the first thing you need to know is that this thing is pretty quick. Nissan doesn’t provide a 0-100 km/h time, but you get 248 bhp on tap, and that makes it feel like a sub-7.0 second car. What’s most impressive, though, is the way in which that turbo engine delivers its power. There’s a satisfying surge of momentum as you put your foot down, but it’s in no way dramatic; you simply pick up speed and, before you know it, you’re overtaking everything.

Quite a lot of this perceived effortlessness is down to the fact that the Altima is so comfortable and quiet. There might be a big turbo engine under the bonnet, but you can barely hear it from inside the cabin. Much of that is down to the new gearbox, which Nissan says makes the engine among the quietest in the segment. The new design also comes with a better drag coefficient of 0.26 Cd, and it has what Nissan calls an ‘acoustic windshield’. All of this adds up to a seriously quiet place in which to sit – even at motorway speeds.

What’s more, the bonnet doesn’t rear up when you put your foot down, and there’s no tug at the steering wheel – the car just goes. All of this stuff, along with some beautifully plush suspension, turns the Altima into a sort of sensory deprivation tank – when you’re inside the cabin, there’s very little that can get in from the outside world to bother you.

Naturally, though, this means that, if you want to drive hard, you’ll find that the Altima is hardly suited to taking corners in anger. Nissan claims that, on the 2.0 Turbo model, a new steering set-up provides “real-time road input and precision”, but if we’re honest, it doesn’t amount to an entertaining drive. There’s plenty of grip up to a point, after which you’ll find you’re understeering really quite quickly into the side of the road, and while the steering is responsive enough, it’s not exactly confidence-inducing.

Turbo engine may provide a lot of speed, but the rest of the Altima is clearly designed for relaxed cruising. The cheaper, 2.5-litre four-cylinder model offers a perfectly respectable 0-100 km/h time of just over 8 seconds. And in a car like this, that would be totally fine – indeed, it’d be a better fit for the relaxed way in which the Altima drives about.

The 2.0 Turbo comes fully loaded, meaning you get a seven-inch display at the top of the centre console, featuring everything you really need – Bluetooth connectivity, navigation, car settings, the lot. There are also automatic headlamps, electric seats on the driver’s side, and a reversing camera. This model also comes with faux-leather seats – which, despite the slightly less-than-premium feel, are actually properly comfortable. Otherwise, there’s loads of space in a cabin that’s pretty light and airy – front and back.

You get loads of safety tech, too. Sensors dotted around the car’s exterior provide functions such as forward collision warnings, blind spot warnings, forward emergency braking, and rear cross traffic alert. All of it works as intended, and none of it is intrusive, which is more than we can say for the safety tech featured on a few other cars.

As for the infotainment tech, it’s all fine that it’s there, but we have to say that Toyota’s offerings are more user-friendly. There are annoyances to the way in which the Altima’s toys work – you’ll only be able to control some functions from the steering wheel, while others have to be controlled through the infotainment system, for example. Plus, the menu designs take us back to being on the Internet around the early-2000s era – it doesn’t feel modern at all. Basically, it all works, but it isn’t exactly pleasant to use.

And that’s actually the general vibe you get with the Altima in this trim. Yes, it’s got leather seats and a bunch of toys, but they haven’t been put together in such a way to make the luxuries amount to more than the sum of their parts. Toyota does a much better job of making its more premium variants feel, well, premium. So, as with the drive, we’d say that you’re probably better off getting a less expensive model – it’ll feel more like the no-frills, comfortable car that the Altima is designed to be.

No surprise here – the Altima is incredibly cheap to run and maintain. Nissan often has pretty good deals when it comes to new cars, so, depending on what the dealer is offering, you could easily get a service package thrown in with the car. As for fuel, you’re looking at around 800 km on a tank, though you can expect more if you drive carefully. Insurance-wise, a fully comprehensive policy with agency repair will set you back around AED 2,000.

It’s little wonder that the Nissan Altima is so popular in the UAE; it’s a solid saloon that’s properly relaxing to drive – if a little dull. But, to us, It’s quick, but you’ll drive it the same as you would a smaller-engined model. If you’re looking for a no-nonsense, mid-size saloon, by all means we’d recommend test-driving the Altima. Just make sure you go for the turbo engine.