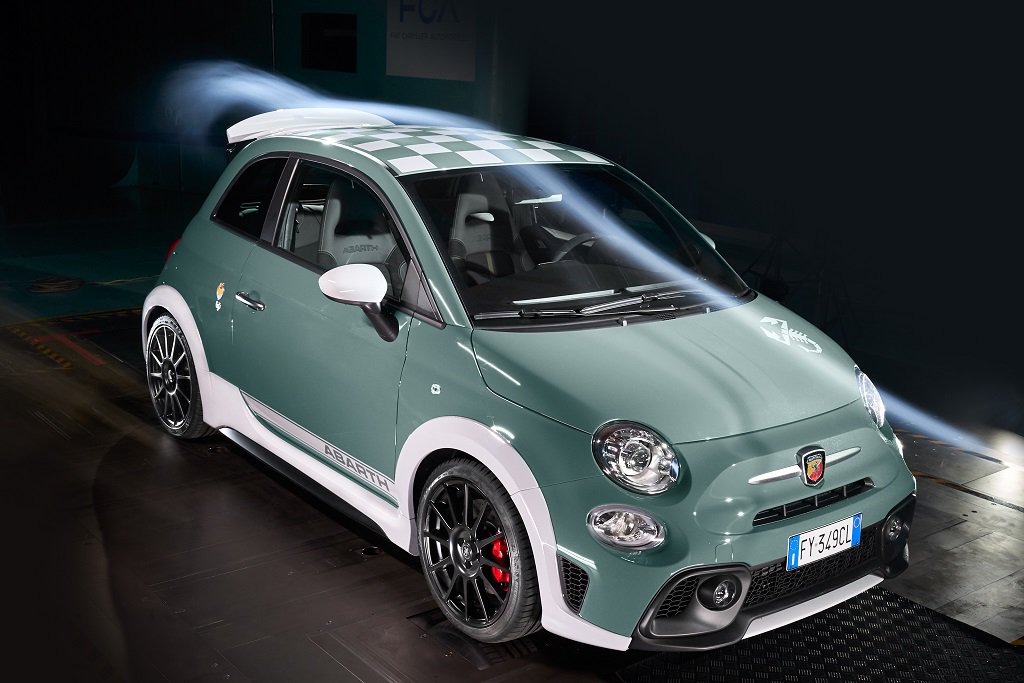 The new Abarth 695 70° Anniversario special edition was presented today in Milan to celebrate the 70th anniversary of the Abarth & C. brand and to pay homage to the ingenuity of its founder Carlo Abarth (1908 – 1979), who was the first to understand the potential of tuning and technical upgrading on standard production cars.

Produced in just 1949 units, which was the year the company was founded, the new limited edition is the most important of the sequence of tributes presented during this year’s celebrations. It is now the turn of the exclusive 695 70° Anniversario to fire up the dreams of thousands of fans of the Italian brand. The new limited edition is dedicated to the fans of the Scorpion and was presented at the 2019 Abarth Days, the largest European gathering of Abarth enthusiasts.

The new Abarth 695 70° Anniversario is equipped with the new “Spoiler ad Assetto Variabile”, which is the result of the work of Abarth engineers in the FCA wind tunnel in Orbassano (Turin), designed to improve the aerodynamics of the car. It increases grip on fast mixed courses and stability at high speeds. In one word, it increases performance. The new “Spoiler ad Assetto Variabile” is, therefore, a tribute to the founder’s performance concept, which went far beyond the quest for pure power, top speed and acceleration. Carlo Abarth strived for comprehensive performance and focused on the search and development of innovative technical solutions. It is precisely this continuous research that made him famous as one of the pioneers and visionaries in the field of tuning.

Intended for collectors as well as fans of uncompromising performance and sportiness, the Abarth 695 70° Anniversario impresses with its new rear spoiler that makes direct reference to the world of motorsports and the legendary racing history of the brand with the Scorpion badge. The spoiler is manually adjustable, just like in races where it is not uncommon to see the mechanics in the pits adjust the angle of the spoiler to allow the driver to set the behaviour of the car according to the track. On the Abarth 695 70° Anniversario, the “Spoiler ad Assetto Variabile” can be adjusted to 12 positions with an inclination from 0° to 60°. In the maximum inclination position (60°), the spoiler increases the aerodynamic load by up to 42 kilograms at a speed of 200 km/h. This ensures excellent vehicle dynamics and more stable behaviour at high speeds, especially on fast mixed grip courses.

A practical example is the legendary Curvone of the Vallelunga circuit, where the “Spoiler ad Assetto Variabile” allows the driver to reduce steering corrections by almost 40%. To achieve a technical level like this, the new Abarth 695 70° Anniversario was tested in the full-scale wind tunnel located in Orbassano, south of Turin, where FCA tests its vehicles.

Built in the seventies and continually updated to implement the latest technologies, the centre is one of the few in Europe, and the only one in Italy, capable of allowing full-scale testing and high air speeds (up to 210 km/h). The objective was to optimise the aerodynamics of each model that is produced by simulating the movement of the car with respect to the wind, like when running in the real world. It was in this centre of excellence that the “Spoiler ad Assetto Variabile” of the Abarth 695 70° Anniversario was developed and tested in all possible configurations and in the various trim, speed and yaw angle conditions.

The looks of the new Abarth 695 70° Anniversario are further characterised by picking up some iconic style cues of the past and present, such as the Record Monza active exhaust for an unmistakable sound, the new Monza 1958 green livery (a tribute to the colour of the first 500 Abarth that set six international records at Monza that year), the many Campovolo grey details, including the “Spoiler ad Assetto Variabile”, the Body Kit, the front and rear DAMs and the mirror caps. The same colour is used for the Scorpion stickers on the bonnet and the chequered sticker on the roof to reassert its sporty look. The 17″ SuperSport alloy wheels and the famous bright red Brembo calipers are also standard. More in detail, the powerful braking fits Brembo brakes with four-piston aluminium calipers and 305-mm discs at the front and 240-mm discs at the rear, both self-ventilated.

The same sportiness can be found inside the cockpit on the new, exclusive “Sabelt Tricolore” seats developed specifically for this special edition. The glorious racing past of the brand is also referenced by the badges on the body in old-fashioned font and the vintage Scorpion emblem, which is an unmistakable tribute to the heritage of one of the most famous Italian brands in the world.

Inside the cockpit is a numbered plate for each of the 1949 units that will be made, making each 695 70° Anniversario an authentic collectable.

The new 695 70° Anniversario is equipped with the most powerful engine in the range. The 1.4-litre turbocharged engine delivers 180 hp of power and 250 Nm of torque at 3000 rpm with a top speed of 225 km/h (with spoiler set to 0° position) and acceleration from 0 to 100 km/h in just 6.7 seconds. In short, the 695 70° Anniversario is the perfect combination of engine and aerodynamic performance.

With sports customers in mind, there is no shortage of connectivity. Apple CarPlay and Google Android AutoTM * with Uconnect™ 7″ HD system are standard with the DAB digital radio and navigation system. The infotainment system has a high-def screen and Abarth Telemetry, an integrated application created to measure performance. Completing the standard equipment are automatic climate control, DRL, LED fog lights and specific mats.

Apple CarPlay is a registered trademark of Apple Inc.

Carlo Abarth was born in Vienna on November 15, 1908, and he achieved almost unprecedented success in the world of motor racing, as the result of absolute dedication to the engine world and to a truly prodigious talent, dedication and flair for innovation. Scooters, bicycles, motorbikes and sidecars. Any vehicle was good for the young man, the important thing was being able to dismantle them, repair them or improve their performance. At the age of 11, Carlo Abarth wrapped a leather belt around the wheels of his scooter to reduce friction with the asphalt and beat the bigger kids in their neighbourhood challenges. Nine years later, he achieved his first successes on a Motor Thun. By now, his precocious passion for engines was mapping out his future path. In addition to driving, of course, the giddiness of speed, and striving for competition. His aptitude for racing that was soon accompanied by an innate flair for engineering and in 1930 he produced his first motorcycle customised with the brand Abarth.

Unfortunately, a serious accident during a race in Linz forced him to abandon motorcycling, but he did not lose the determination to push himself and his own limits, and he continued to race with sidecars, a vehicle that he made famous, thanks to exploits such as the race against the Orient Express train (obviously won by Abarth) in 1934. This marked a new beginning for Carlo Abarth. In 1945, he moved to Merano and becomes an Italian citizen to all effects. Then, after a brief experience in Cisitalia, on March 31, 1949 he founded Abarth &C with driver Guido Scagliarini. Their first car was the 204 A derived from the Fiat 1100. It commanded attention on 10 April 1950 when Tazio Nuvolari drove it to win his last race, the Palermo-Monte Pellegrino. Since then, new sports and industrial records, revolutionary tuning kits and legendary races have been continuously added to the history of the Scorpion. An example? It was in 1962 when Carlo Abarth decided to race the Abarth 1000s with the rear bonnet open to encouraging engine cooling but he soon realised the aerodynamic impact of this modification. So, in 1966, he made a real resin spoiler, becoming one of the first to equip racing cars with an spoiler to take advantage of the aerodynamic benefits it provided. It is precisely to this record that the new Abarth 695 70° Anniversario is paying tribute. 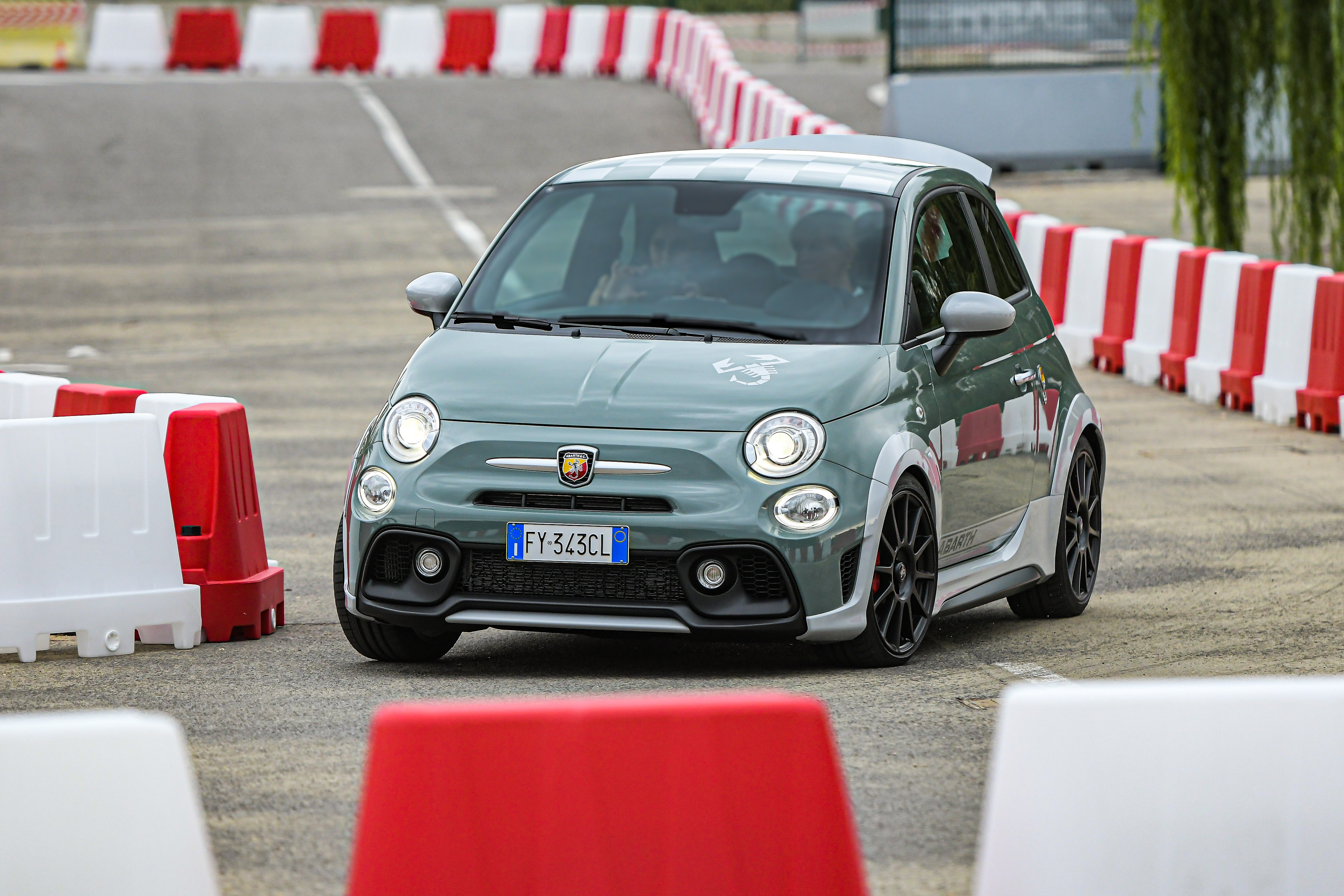 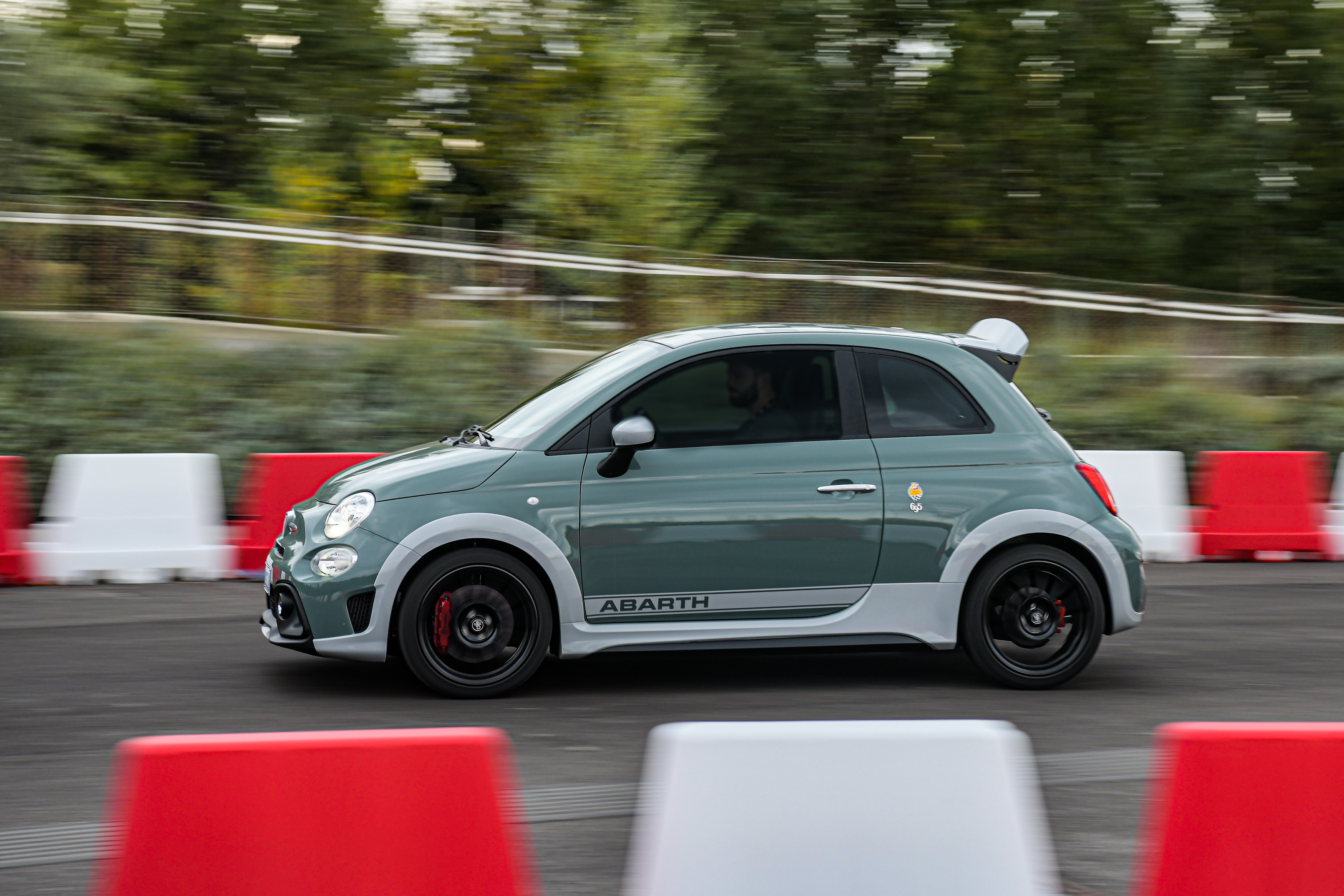 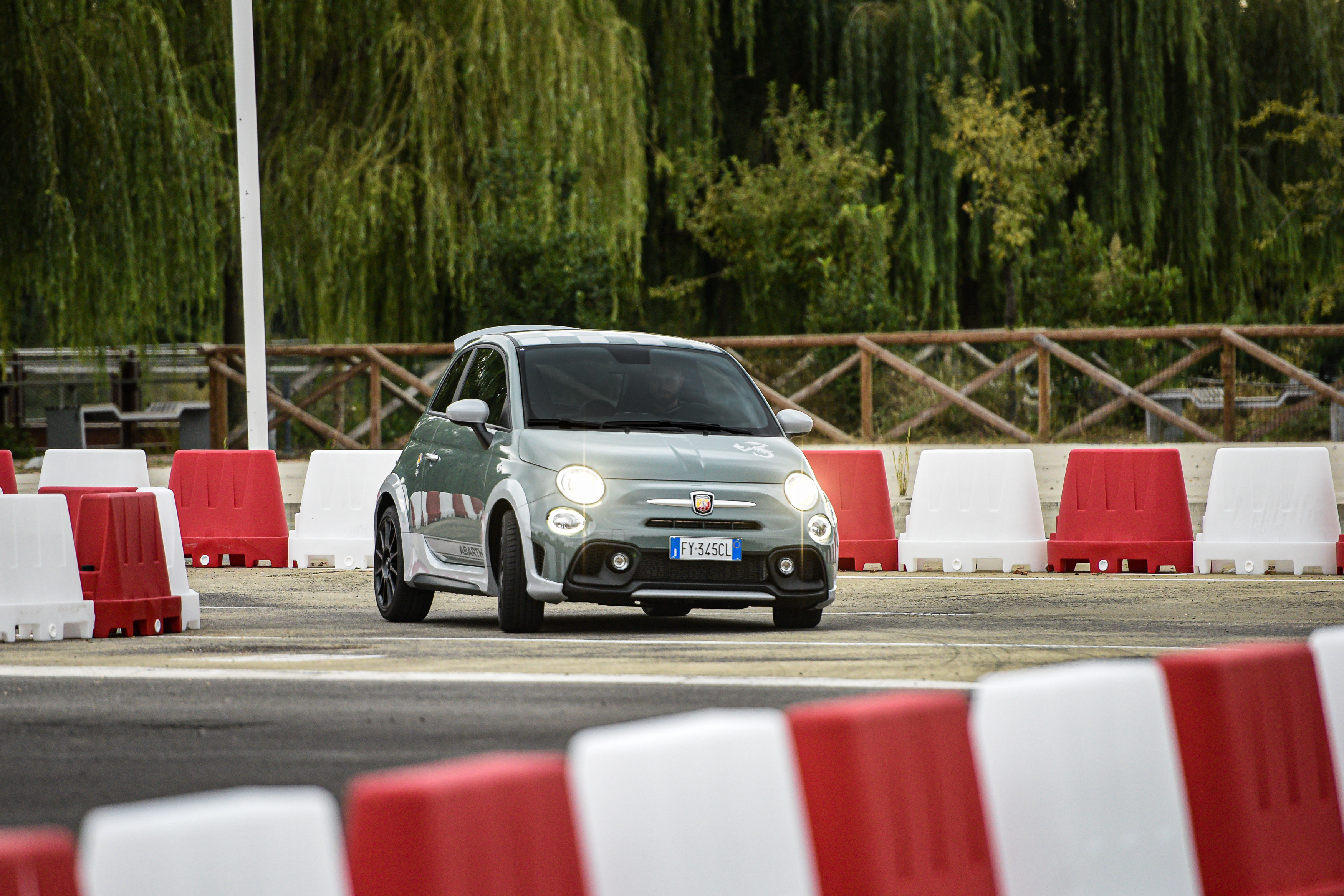